Hi, There have been a time since I last post.
I guess sometime you turn really busy and forget things.
But I guess the passion to blog were a bit lost in the spring, so sometime you need to take a break .
Just to find the way one more.

I have now 19 post in draft and I need to finish some soon.
So I have something to do, indeed

But let go to some news

Let's take a look
Different covers and layout indeed. Both have the dub and the cut version.

I like the purple version,just the color and layout . Or more the different layout and covers.
On the release of 2008  the dog jumping out on the cover seems to lost their tail and it's a bit a mess.
Just if you compare of the quality of the covers.

So today, the big news, that make me so happy is;
I got the newest dvd release
I got a bit surprise  when I found this one in a store.
For me that are a bit nerd and like to collect the different editions release 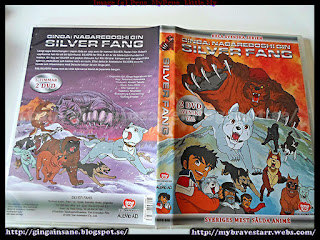 I just  on the new edition , there are some darker purple color , then the early release.
But other then the inside on the new dvd is mostly the same, as the dvd release of 2011


If we could take away the text on the cover , like ;
" Hela Svenska serien"
Meaning "The entire Swedish Series"
That will be better, since  there are already that say that this dvd have Swedish dub.
But also the dvd have also Finnish and Hungarian dubs aswell.
But well sometime or often the Swedish release have extra text, that telling this is the dub version


Right, if you take a look at the cover, you see that  the image of Akakabuto with "jumping flying dogs ", from the uncut Swedish version of 2015
You can see the image here 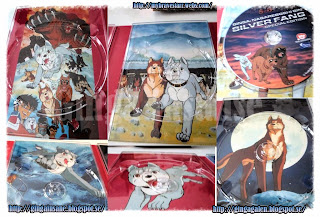 A other thing I notes were that face that some dog have lost there tails
I know that Kurotora have been missing his tail since the third vhs release (with mean a time back, somewhere in the 90's) . At lest Kurotora got his tail back in, if you look at the back cover on the 2011 release.
But now have Cross lost her tail and please don't get me started on Riki
Or Smith     >_>
Take a look at Akakabuto's claw, frame. It seem like that clip and past , and not work on that one.
It just feel a bit amateur to clip in dogs , bear on the cover and not do a better work.

You can indeed read more at the early blog about  Silver Fang Dvd's
If you cant more details and images , a taste of Silver Fang dvds history 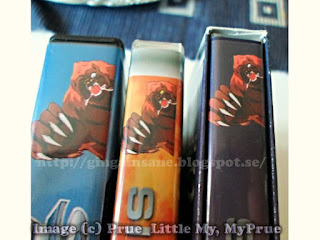 I have just update the history list of :  Silver Fang Dvd's