As you could see in ; A Package Arrives
I got two of the newest manga with Weed

There aren't any special with the manga, if you hoping about :Weed stickers, postcards, poster and so It's the manga with Weed and the so called : Monkey war or arc
It's interesting idea about the Monkey war or arc
And here we get to Know more about weed's family
Well I will not say no more, because it can be spoilers for peoples who haven read, seen the manga's.

The one thing is at the back of both manga's  or perhaps the best ting is the competition.
The First competition. ends at the 10th of June.
And the you can win Orion manga's (As far I can see) Vol 1-22
The Ginga Densetsu Weed plushies, nice to see them one more ^^
But also Weed & Orion Tosho Card
See more about the Phone & Tosho-cards from mine early blog

The second competition end of the 24 th of June
There are most the same prizes as on the first manga,
but inserted of Weed plushies (NO plushies here) you can get the Ginga Densetsu Weed ; Towel.

I guessing there are a limed number on the item's , as you can see in the photos.

The Ginga Densetsu Weed Special: Gajou no Kettou-Hen Jou-Kan release in March the year of 2004.
And can show up in auction or second hand manga stores .
Also the Ginga Densetsu Weed Tokubetsu-ban - Weed Gaiden & Riki-Hen
As you hear have the Weed Gaiden & the Riki story's in the manga .
Not forgetting the competition to win ginga items. On th back side like the other three manga's
This manga were release in November, in the year 2005

With the G comics (  Gコミックス ) manga there have also been other manga's out with Weed, as those  Weed Special Publication . As you see in the photo 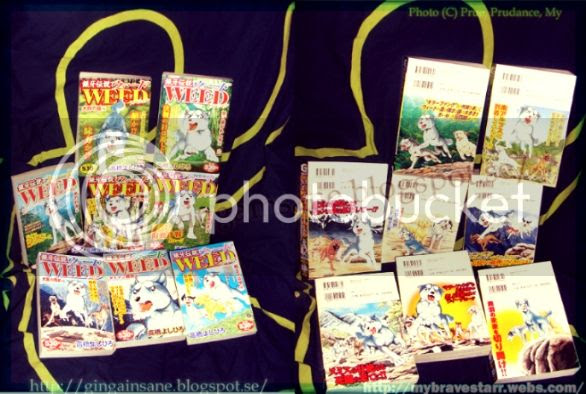 
As some review too be the third edition of Weed Manga's.
I myself I think that the Ginga Densetsu Weed Special: Gajou no Kettou-Hen Jou-Kan are NOT one edition.
Just Special Publication, extra manga's .
For I know, to many outside Japan have their own theory's about the edition of manga to Ginga series.
But I think that this is more logical .
Well it's my thought .....

I wonder if it's true that the G comics , Gコミックス  manga's are limed release.
For the can be a bit hard to get by now
If you don't find them on auction site or secondhand stores with manga's

At in some Japaneses secondhand manga store you can get them for a lower price.
Then for example Ebay , sometimes. There they can be more expensive.

I will update with a bit more photos about the new Weed manga soon
Upplagd av MyPrue kl. 9:42 PM