The Start and some talk

So this is the start of my blog

Oh boy it's have been forever since I start blog or write online (blog, life journals, journals).
But this feels as a good start. Well lets hope so at lest

So I have been around for a time.
At first I were enchant or bewitch about the series called Silver Fang, that most been in around the year/s 1986-1988. When I saw Silver Fang  for the first time. 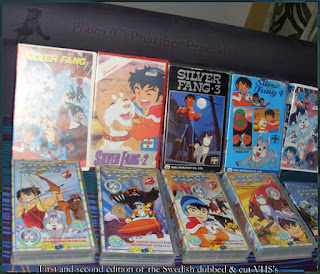 The first edition of the vhs were release as rent vhs at the time.
And are nowdays hard to get by.
I got vol 2 & 4 at my home town , at a store who rent and soled vhs, newspapers, magazines , candy and other things.
My dear mother were that one who gave the two vhs as birthday presents. I also got "Skriet från vildmarken" (Call of the wild) the animated movie, at the same time. I remember that my younger brother were very young . I recall that they were with me when I opened the presents.
So it's most been around the years 1989- 1991.
So Sweet times ^^  to be a kid ones more

Lets see I got vol 3 on a auction, the Swedish  auction site called: tradera
For a good price.
Lets see vol 4 , the last vhs
It most been around 2002 ? Or something early or later

The second release I got were also at my home town store. But this time I got all four at same time.
Those eight vhs's are very special to me. And also the start of the collection hunt of Ginga.

Some time I learned the original name were Ginga Nagareboshi Gin
And so also start the hunt for facts, info about the series
That catch the heart : )


So I have told the short story how I meet Silver Fang , Ginga Nagareboshi Gin. And learn later about Yoshihiro Takahashi, and his other work.

This have been a long time.
And my collection of Silver Fang, Ginga,Ginga Nagareboshi Gin and Yoshihiro Takahashi.

On the photo you see some of the many , many manga's of Yoshihiro Takahashi that I have in the collection.
And yes those take up space in the bookcase  ; )

So last year I made a collection site , there you can look  on my list and photo's

I have never ever called myself an expert on Ginga or Yoshihiro Takahashi. But it's true I have been around for a time now. * Bahaa I hate to feeling old *
But the best thing about Ginga, Yoshihiro Takahashi item's,merchandise , manga's and other things. as facts info that you learn always some new things.
You never know what can show up on  Japanese auctions, that are one source (of many)

But I hope that fellow Collectors  can perhaps help each other out. Support, give tips and talk, share their  knowledge, photos, memory's, items
That sound great in my ears  and mind ^^