Two days ago  I read about Moss on Weedpedia_ twitter
And at : Weedpedia's Image Moss
Like the Image , by the way : )

I find that interesting

So far I have seen in Meteor Gin (Ginga Seiken Densetsu Meteor Gin), the Japanese and Finnish at lest what I can see or read it's say Mastiff

Just some random thoughts
Then again , remember Hiro  (from Ginga Densetsu Weed)  ?
That is also a character who seem to be a mix breed
On the Ginga Densetsu Weed Artbook  (Original illustrations collection) it's says
Saint Bernard .
But with other source says Great Pyrenees

As many fanbase , fan-community
And not let us not go and talk about Weed, the main Ginga Densetsu Weed.
Many Japanese source say that Weed is an Akita Inu
Not a mix as some others fan-community, other source says Weed is half Akita and half Kishu
Meaning that Sakura is a Kishu Inu and Gin an a Akita inu


I don't know about Weed thing and the discussion.
But to me there is more logical  when you thinking about other series that Yoshihiro Takahashi work,
that Weed is a Akita Inu
And not mix.
So far the manga's and Japanese source says that too.
That could be weird that many introduce Weed as a Akita Inu, if that was't the case

Well this were some thoughts, so back to Moss 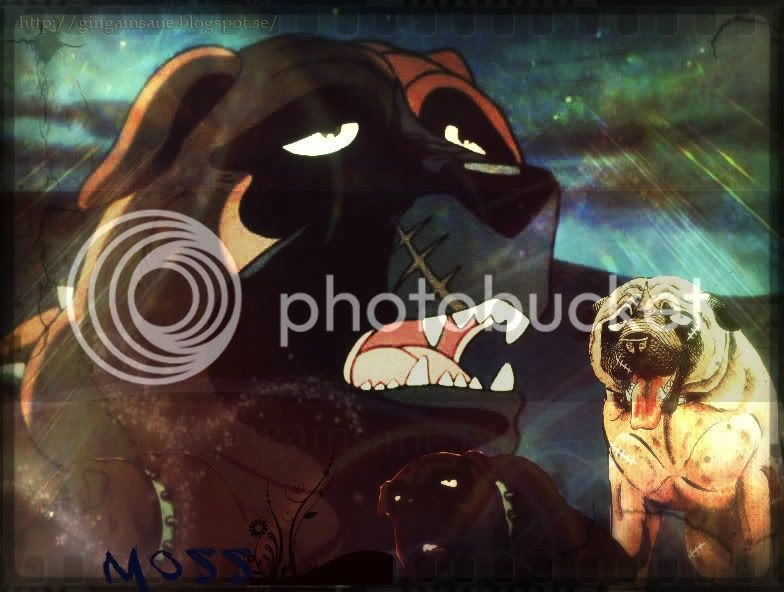 Moss is one of my (many ) favorite, from Ginga Nagareboshi Gin series

So what ever dog breed he is or what some say he is ...
I don't really care , for :
I still love personalty , that characteristic strong power he have. When you look at him, hear Moss talk and act.
Still Moss wise person with a gentle heart
At same time a wild dangerous opponent and a strength like no other : )