Boku no Inu,Boku no Weed

So I'm happy to write a little about one of mine favorite Weed extra manga ;

Boku no Inu, Boku no Weed
My Dog, My Weed You see the one from 2001 with obi's/add/advertising  and the other one from 2003
Sorry for the text & copyright marks
Sadly there is people who take that they find on the net , so I try to show the image's
But at same time at lest try to make it harder for those who steals. In away I guess

The aren't any differs in the manga's , just smaller things like :
The covers can feel different.
The old one are more book material, more paper feeling .
Sorry I can be bad to explain some times
But that feel different on the covers
The one from 2003 feel more clean  more like plastic book cover

When you look at the both the one from 2003 are more cleaner , more shaper
and are more black and white sharper colored then that one from 2001
Other then that there isn't any big differers

Both have the same story's and facts


Some info :
Name: Boku no Inu, Boku no Weed
Language: Japanese
Author: Yoshihiro Takahashi
Publisher:  NC Nichibun Comics
Published: At first in the year of 2001
And there have been reprints . I have one from year 2003
Number of Pages:  232 pages
But there are 23 pages with colors , color images
The size on the Manga :  In height:18 cm  & width :13 cm

This one can be easy to be find in shop's, auctions in Japan.

What the manga about then ?

This one remind me of Yoshi older special manga/book

I'm thinking on : Takahashi Yoshiro No Intuo Kurashitai , from the year 1994.
Yes that one were focus on GNG and other thing
But both take up  same issue, more or less. They are in a bit same way
Boku no Inu, Boku no Weed are more focus about the Ginga Densetsu Weed series

But also Yoshihiro Takahashi inform about relationship between human and dog's
There are info about dog training , ideas about ownership of dogs and the responsibility, with other things . Takahashi pend up and show and tell about his and his family's dog owner experience

As well the many relationship in the Weed series between character's .

We get to know Yoshihiro pet's, family dog's  (like the wolfdog Hanako)

And how they meet Lenny, who is seeking to see her son Mer (some call him Mel) one more time
There are some page from the Weed series, like :
When Weed try to help Sasuke , who is nearly killed by the guard dog Banken (?)
And GB find the courage to fight and help his friends.
13 page with this event
There are also 15 page when Weed finds Lenny. Even that GB things it's a was't of time,Weed with gentle heart  can't stand what GB is saying. And fight GB.
Later one Weed stole some food from the human to give to Lenny.
He hear her story and plan to find her puppy Mer (Mel).
There are also 26 page from the Ginga Densetsu Weed start.
When GB meets a young puppy
Who he later became like a big brother to the main character.
More or less

The manga have some image's, photo's, but there are more text.
I want to call the manga to be a book, more then my idea about a manga.
Sure there are image, photos, even drawing story of Yoshihiro life (with dog's)
But this is more a text book then a manga or weed extra series manga. 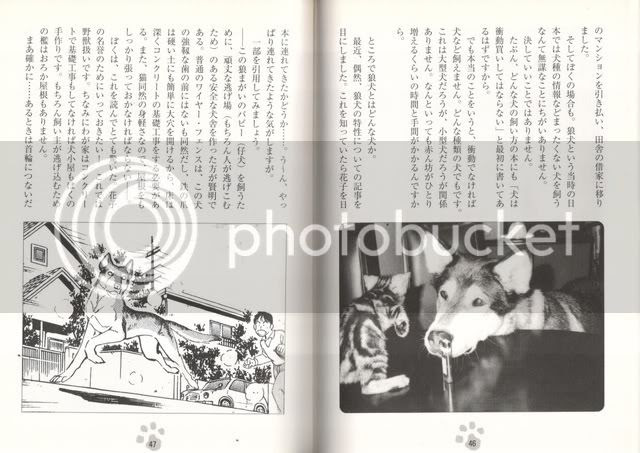 Yoshihiro Takahashi is really great to draw expression, feelings.
You get the feeling to understand what happening, what going one.
Even you perhaps don't read/speak Japanese 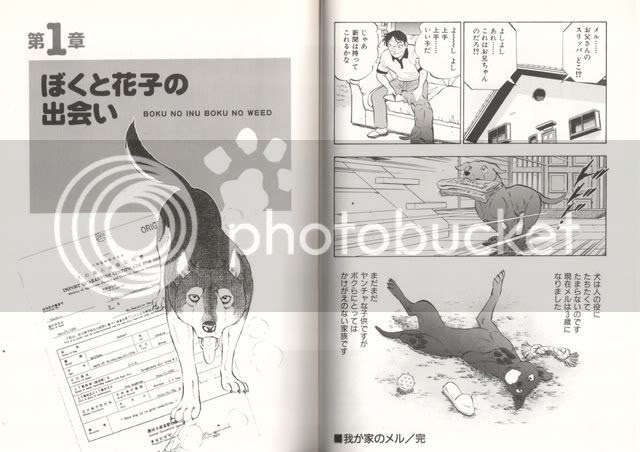 In the end of the manga we can see the first start of the Weed manga, how GB promise Sakura to take Weed to his father. In the manga is many flash back to the Weed series, but also how it all starts with the series. Like a new legend take the first steeps
But still is the main focus on Weed's relationship in his new path 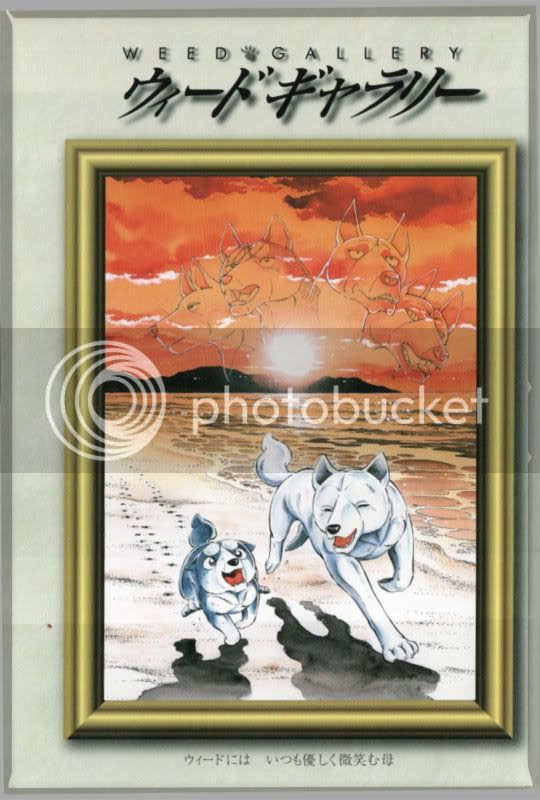 In the end of the manga there is seven images with colors.
It's says on the first image ;Weed Gallery


I got the one from 2003  when I order form a shop called : Sunai
This is a Swedish & Japanese shop.
I didn't recalled to have hear the title name before ,they use a other name at the manga at the time
So I were surprise when i got the one
But it took some time before I realize that I had two with different prints

Updated with some photos and images from the mangabook

If you want to get more info or see more photos you can go to :
Nihonbungeisha.co.jp_Weed