So I have thought and planning to write about the : Weed World Magazines
As well I got some request as well
I know that  some have talk about this magazine, but I have few info about them or topics.
So I hope I can help other out there with some info, my thought and photos
Specialty when the price can be low and crazy high on those magazines
You will be your one judge about the price and if this magazine are interesting or not 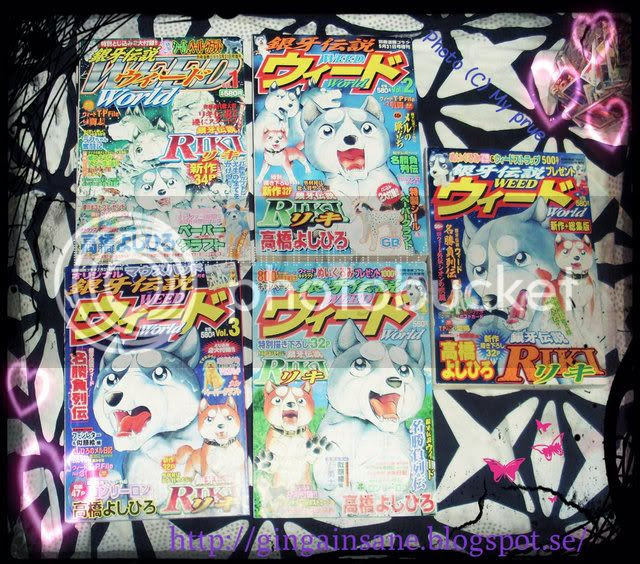 Here is what I know all the magazines of Weed World , vol 1-5
I think that is the vol 5 that can be a bit hard to find then the other four .
But we will come back to that later one.

So Now I take a look at Volume 1 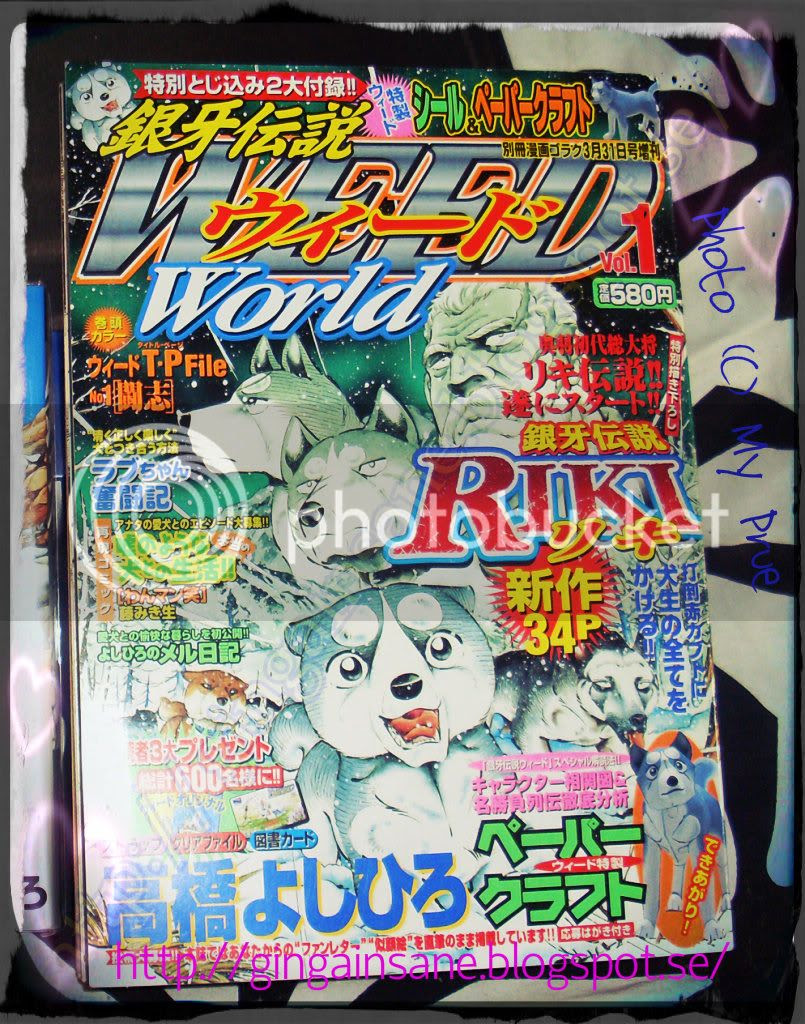 Number of Pages: 336
8 pages images, adds with colors
In the end of the  magazine ther is 8 pages with postcard ads (black & white) that you could send on and be in some competition for prizes
The size on the Manga :  In height: 16 cm ,width : 18,5cm & thickness : 2,3 cm
Other:
Like may have said before this were special magazine that come about in 2002. There were five magazine and with them competition, fanarts, fans letters and info about the Weed series.
All five have or shall have papercrafts . There are characters as Weed, GB, Mel, Jerome and Sasuke.
Vol  1 and 2  have Ginga Densetsu Weed Stickers

So what is in this magazine you probably wonder
I will make small list ;
- Ginga Densetsu Riki , 34 pages.
The start of Riki's story , noting extra about it .
- There is the main story of Ginga Densetsu Weed.
The start of the series , When Weed meets GB and to the fight with Blue.
Weed meets GB, Sasuke, Smith, Lenny, Mel/Mer, Blue, Hook and many more
And between the chapters, pages there are info, fan art and fan letters in the magazine.
Also info about the series, event , characters and other things.
In the end of the magazine there are a test that you can do to see which character you are.
Let's see what more
- There is four pages about Yoshihiro Takahashi & the Labrador Retriever he and the family had or have.
-  It's seem info pages about dogs, puppies and dog in general , write by m.wada ?
I can't translate , sorry.
But it's about four pages with images (black& white) on The Labrador Retriever, adult and puppy's.
- There is sixteen pages about the comic series : Wan Man show

It's  about a man and his dog , a Shiba inu  (female dog)
Not draw or written by Takahashi or related to Ginga Weed.
At lest what I seen or heard so far  ^^
I think it's a sweet ,funny series
Mostly a daily life of a dog owner and the dog's life.
This chapter tell how the man got the little shiba .
And also the trip to the veterinary

- In the end of the magazine we have some adds about Weed World vol 2 , postcard ads for competition.


When it come to the papercrafts that I myself love so much.
There more like three thick pages with different characters.
Vol 1 have Weed as you see
The papercraft are made by Kei Craft Studio
Link to the their home pages : http://www.keicraft.com/
Take a look at their : Gallery_With Weed

I really love to see more papercraft from Ginga Densetsu Weed characters
Aswell as the Ginga Nagareboshi Gin characters and other from Yoshihiro Takahashi works. 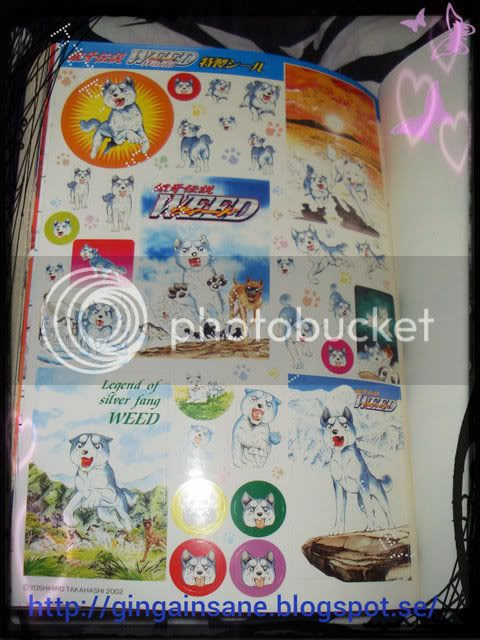 So what about the sticker then ?
Well there are random images from the Ginga Densetsu Weed series, aswell as the extra manga's and books.
It's about 32 stickers  (if I haven't missed anyone)  as you see.
It's funny and interesting  to read on two stickers :
Legend of Silver Fang

As you see there is different size aswell on the stickers 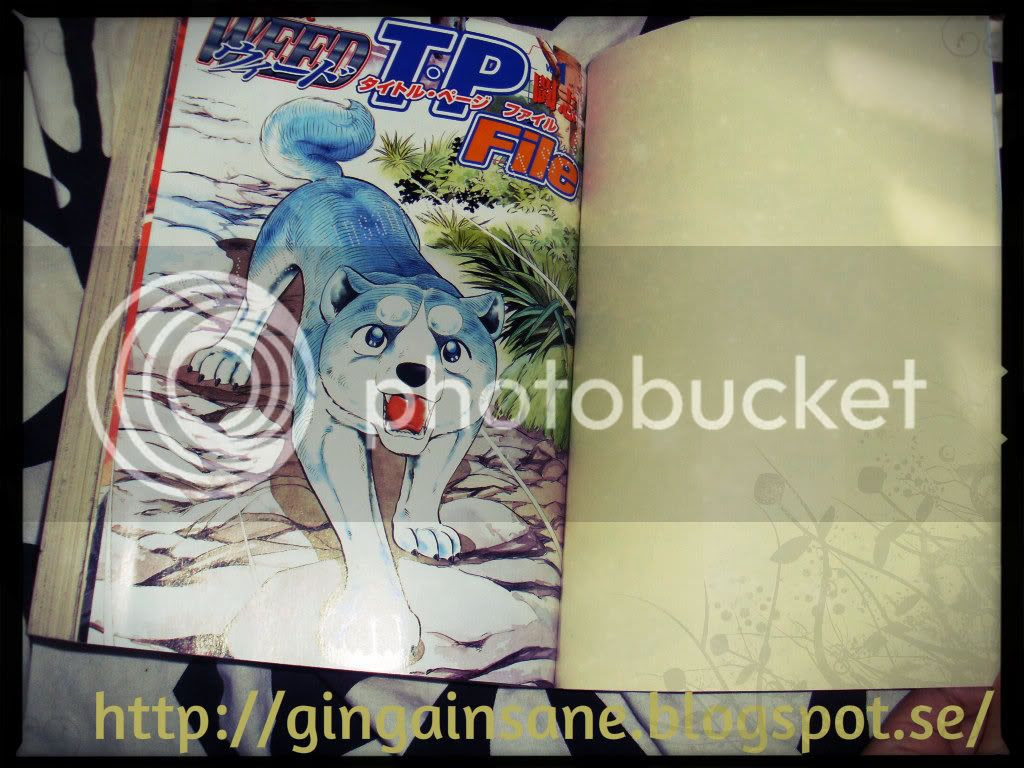 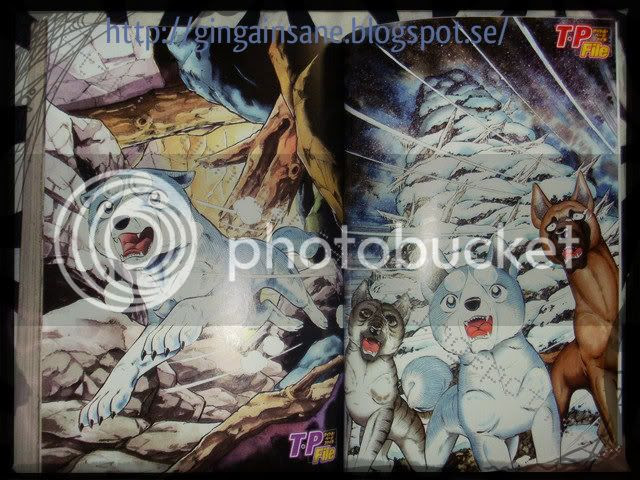 I have no idea what the T・P File is , but there are some image and chapter called T・ P File
I like the way Weed and the pack standing and looking out and how the sunset or sunrise 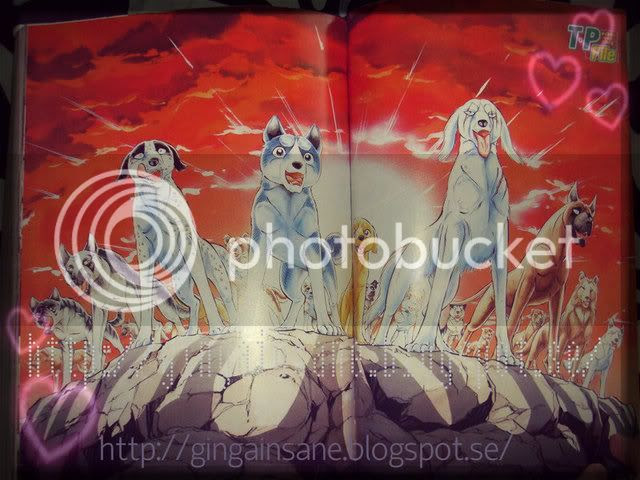 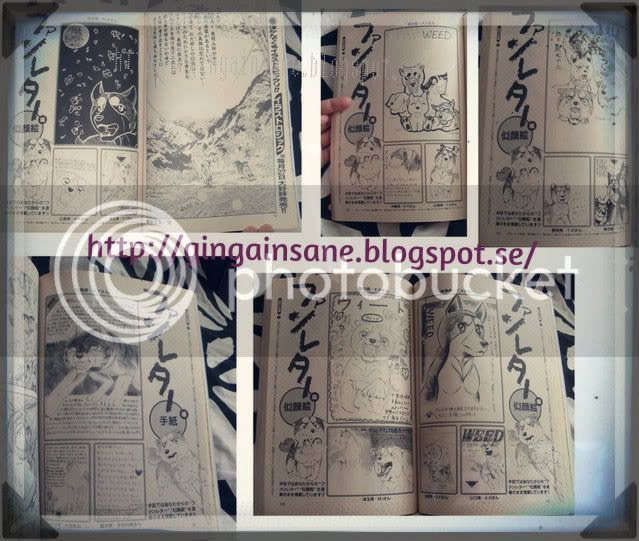 I talk about the competition for prizes, so I most write some of those too 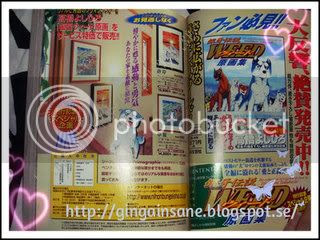 One are some painting boards that you could win ?
I think so

You could buy the magazine and answer some questions to get to a lottery .
And if you were luck win .

I think it's interesting, but then again it's more text in the magazine then anything new about the series Densetsu Weed.
To tell the true I hope for more in the magazine, more extras of images or something more.
But you can't get all that you hope or dream one I guess.
I hear that the prize of the magazine at the start were  about 580 yen.
If that were true that were a low price for today. I mean if you have been looking around the prices for the magazine just jumped up way hight.
At lest I think so .
True that they are sometime hard to find, depending were you look .
Like the auctions on Japaneses yahoo you never know what will show up.
As I said at my blog post : Oh vol :2 of Weed World
There have been lower prices about this magazine.
Also I collect mine when they weren't so popular . I think this magazine are now, today overpriced.
Really
But that is mine opinion  ^^

Then again it's you who decide how much this worthy and how much you are willing to pay.
---