Since I have already write about Boku no Inu,Boku no Weed,
So I thought that could be nice to write about a other manga.

Boku no Inu,Boku no Weed and this manga have many similarity
You can read more from my early post about : Boku no Inu Boku no Weed

That one I talking about is :

" I want to live with the dogs " by Yoshihiro Takahashi

This one make me wonder .
The title of the book, manga says:
高橋よしひろ のイヌと暮らしたい  (入門以前シリーズ 2 )
" I want to live with the dogs of Yoshihiro Takahashi "
But on the last ting : I get from the translate is this :
(Introduction to two previous series ) or (Series 2 previous Getting Started)
I guess that should be Introduction to the previous series , but the number 2 thing make me wonder 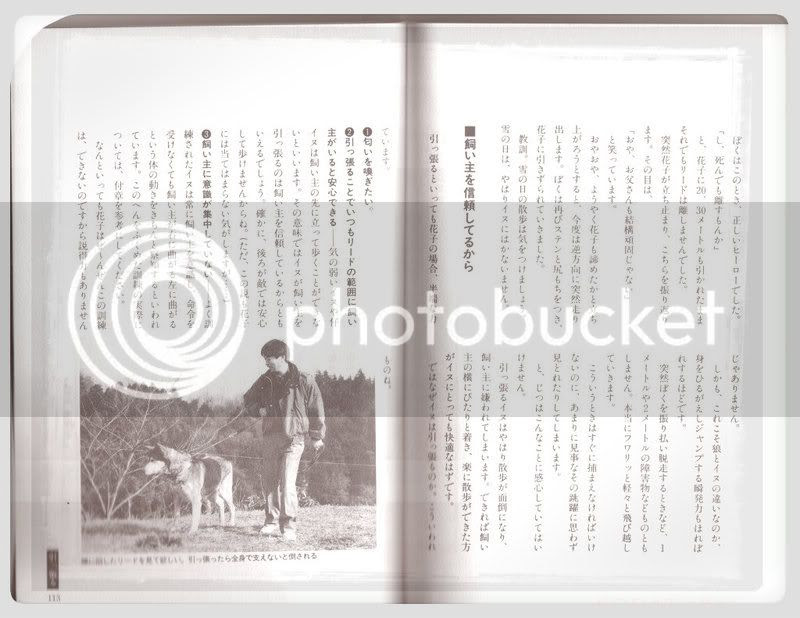 What the manga about then ?
It's more a training and discipline information book about dog .
More a text book , with Japanese text

Even there are some images and reference from the Ginga Nagareboshi Gin series.
Yoshihiro Takahashi himself show some personal & family photos and tells about his own experience when it come to dog. As the title says " I want to live with dogs"  this is a dog book. 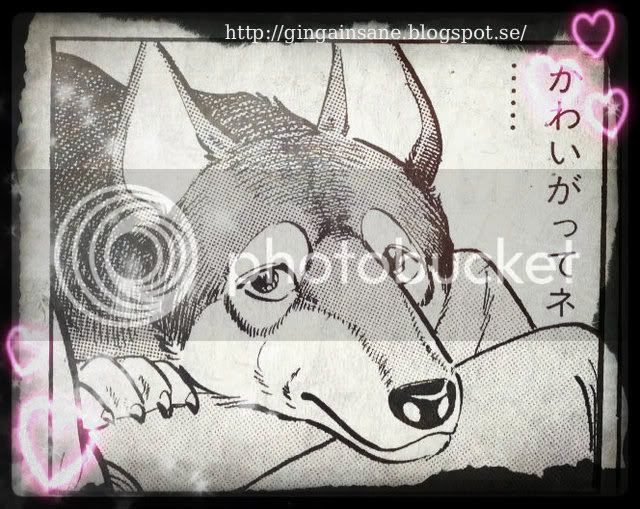 Takahashi have also draw some series when he meet the wolfdog Hanako and how she became a family member .
I like the drawing comic series when it come to Hanako and Takahashi family.
I have said it before and say that one more time "

"Yoshihiro Takahashi is really great to draw expression, feelings.
You get the feeling to understand what happening, what going one.
Even you perhaps don't read/speak Japanese" There is a focus on Hanako and Yoshihiro and their relationship
The wolfdog Hanako were born in 1984 in America , but move to Japan in the year of 1985.
Over 16 years Hanako were a dear family member and a great inspiration for Yoshihiro.
In this manga book you see the challenge Yoshihiro Takahashi had and how devoted ,enthusiastic he became when it come to dogs and the life's that come to be a dog owner
With emotional he tell us how Hanako teach him about the dog life, more or less anyway.

Yoshihiro Takahashi cooperate with dog training club name ; Campanion Dog Training Club and other dog coach, trainer, as well as some photographer .
The first two pages are with colors.
There are a Photo of Hanako in color and small photos on 16 different dog breeds.
Some of the dog breed show up more then others in Yamato and Ginga Nagareboshi Gin series.
What can I say more, it's seem to be six parts or chapters in this book.
The main focus about dog, dog training.
Still there are small comic, manga page about Hanako & Yoshihiro . Even images from Ginga Nagareboshi Gin series. I think there were in the year 2001 when Takahashi  got a new dog, the black Labrador Retriever named Mercedes. You can see more info and images , photos on  : Boku no Inu Boku no Weed
But there most have been around the year 2000, at new year that Hanako passed away. After being  ill , sick. In both book Takahashi Yoshiro No Intuo Kurashitai & Boku no Inu Boku no Weed I think that Yoshihiro Takahashi have his way to tell about the feeling , the emotional when it's come to a friend, family member as dogs became or are and the way how they pass away.
The Death thing is new for Takahashi, you see it often in different ways in his art, series .
Even there is a calm, spirit way it's more a talent that Takahashi can show and pass to the reader.
And for that I admire Yoshihiro Takahashi for.

I had a problem with this book, even that are a sweet book
I thought there were more manga, more info about Ginga Nagareboshi Gin series, if you look on the cover you can think that et lest.
But still this is the series that Yoshihiro Takahashi for became more famous for. 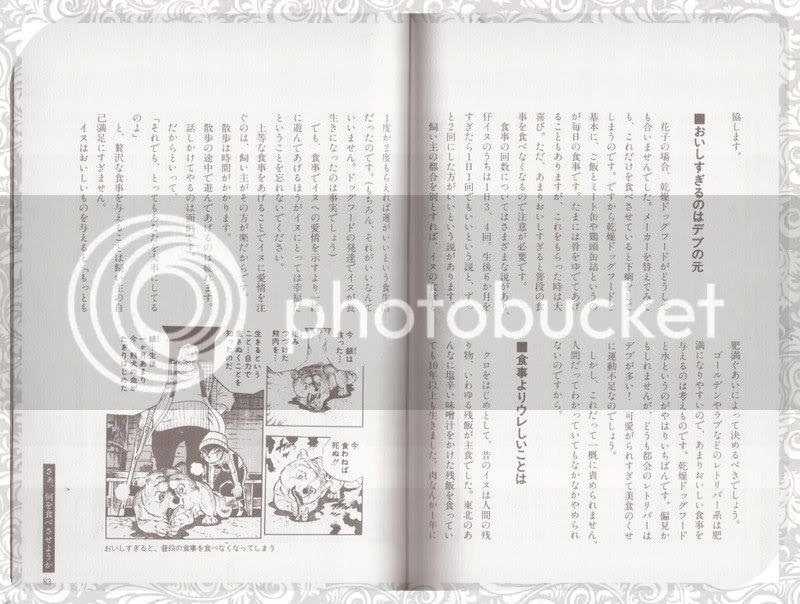 And fans have said this is a rare manga to get on hold on.
Well that can be very well be true, in a way .
BUT, yes there is a but
You can fin this book at secondhand store, book stores (used book), on some auction's as the Japanese Amazon.
I have seen the book cost all from 800 yen to 3000 yen .
On other shops or stores outside Japan the prize can be much higher.
Some say that this manga is rare , more rare then the others of Yoshihiro Takahashi. But in a way I think this one are more harder to find then so rare that other says.
You just need to know were to look.
In the end of April there were two sellers on Japaneses Amazon and the had 3-4 books.
The prise were as the lowers 800 yen and the highest 3000 yen .
They were popular and took about a week or two before they were sold.
even on Bidders.co.jp  (Japanse auction site, more focus on books, manga's) the Takahashi Yoshiro No Intuo Kurashitai book have show up.Even on Auction on Japaneses Yahoo the book have show up.
Last time I saw it were about 3000 yen
I got mine extra copy of the book for auction at Bidders and paid 1500 yen.
That most be about 18 dollars and there were shipping cost as well.
But still i think that were a low price there other auctions as Ebay or stores sell this book for.
I have said it before aswell, beware about prices and items.
For there will be sellers that try to sell the items higher , and sometime we fans or collectors need to be awake for that.
Some just try to rip out so much money they can of us. So we need to be awake and questing ourself: is this worth it ?
Sometime I think we don't doubt, question some prices that show up on auctions or at shop, stores.
That way a part of mine blog is to help other fans to get a fair price, deal instead be rip off on money or being foiled by some person or persons

I myself like this book.
I like how Yoshihiro Takahashi opened up and tells his own experience about dog, dog training and how it can be as a dog owner.The images , photos are interesting to say at lest
I find the book interesting and lovely to have

But I need to say that this is more a Japanese book, text book
then a manga.
I really most say that so other aren't confused.
There isn't anything wrong with a text book, but there have been  people who have wonder about this one.

As you see on the image Yoshihiro Takahashi got inspiration from Hanako  : )
She seem to be a bit handful and wild.
In the end of the book there are info and photos ( black, white , yellow colors) how to train dogs and other things.
I have show you some of the pages from the book. But as I said this is more a text book

amazon.co.jp_
- Yes Amazon Japan are a great place to find books, manga's and other things
Here you can also get some info at same time about the book, manga


Nihonbungeisha.co.jp_Weed
Yes sure it's more focus about Weed series, but there are also info about Yoshihiro Takahashi career
and his, family dog's.


Not forgetting
Google.com
Even that you will beware that the translate can be a bit weird and not so trustful sometimes